Link to this page

Paolo Veronese (Caliari): The census in Verona attests that Veronese was born some time in 1528 to a stonecutter named Gabriele, and his wife Catherina. By the age of fourteen Veronese apprenticed with the local master Antonio Badile, and perhaps with Giovanni Francesco Caroto. An altarpiece painted by Badile in 1543 includes striking passages that were most likely the work of his fifteen-year-old apprentice; Veronese's precocious gifts soon surpassed the level of the workshop, and by 1544 he was no longer residing with Badile. Though trained in the culture of Mannerism then popular in Parma, he soon developed his own preference for a more radiant palette.

By 1556 Veronese was commissioned to paint the first of his monumental banquet scenes, the Feast in the House of Simon, which would not be concluded until 1570. However, owing to its scattered composition and lack of focus, it was not his most successful refectory mural. In the late 1550s, during a break in his work for San Sebastiano, Veronese decorated the Villa Barbaro in Maser, a newly-finished building by the architect Andrea Palladio. The frescoes were designed to unite humanistic culture with Christian spirituality; wall paintings included portraits of the Barbaro family, and the ceilings opened to blue skies and mythological figures. Veronese's decorations employed complex perspective and trompe l'oeil, and resulted in a luminescent and inspired visual poetry. The encounter between architect and artist was a triumph.

The Wedding at Cana, painted in 1562-1563, was also a collaboration with Palladio. It was commissioned by the Benedictine monks for the San Giorgio Maggiore Monastery,on a small island across from Saint Marks, in Venice. The contract insisted on the huge size (to cover 66 square meters), and that the quality of pigment and colors should be of premium quality. For example, the contract specified that the blues should contain the precious mineral lapis-lazuli. The contract also specified that the painting should include as many figures as possible. There are three hundred portraits including portraits of Titian, Tintoretto, and Veronese himself) staged upon a canvas surface nearly ten metres wide. The scene, taken from the New Testament Book of John, II, 1-11, represents the first miracle performed by Jesus, the making of wine from water, at a marriage in Cana, Galilee. The foreground celebration, a frieze of figures painted in the most shimmering finery, is flanked by two sets of stairs leading back to a terrace, Roman colonnades, and a brilliant sky.

In the refectory paintings, as in The Family of Darius before Alexander (1565-1570), Veronese arranged the architecture to run mostly parallel to the picture plane, accentuating the processional character of the composition. The artist's decorative genius was to recognize that dramatic perspectival effects would have been tiresome in a living room or chapel, and that the narrative of the picture could best be absorbed as a colorful diversion.

These paintings offer little in the representation of emotion; rather, they illustrate the carefully composed movement of their subjects along a primarily horizontal axis. Most of all they are about the incandescence of light and color. The exaltation of such visual effects may have been a reflection of the artist's personal well-being, for in 1565 Veronese married Elena Badile, the daughter of his first master, and by whom he would eventually have four sons and a daughter. 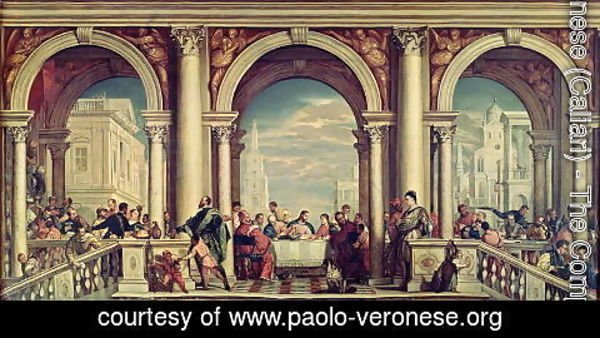 The House of Levi

In 1573 Veronese completed the painting which is now known as the Feast in the House of Levi for the rear wall of the refectory of the Basilica di Santi Giovanni e Paolo. The painting was originally intended as a depiction of the Last Supper, designed to replace a canvas by Titian that had been lost in a fire. It measured more than five metres high and over twelve metres wide, depicted another Venetian celebration and was a culmination of his banquet scenes, which this time included not only the Last Supper, but also German soldiers, comic dwarves, and a variety of animals; in short, the exotica which were standard to his narratives. Even as Veronese's use of color attained greater intensity and luminosity, his attention to narrative, human sentiment, and a more subtle and meaningful physical interplay between his figures became evident.

That the subject was indeed a Last Supper, and then some, was not lost on the Inquisition. A decade earlier the monks who commissioned the Wedding at Cana had requested that the artist squeeze the maximum number of figures into the painting, but the Counter-Reformation had since exerted its influence in Venice, and in July of 1573 Veronese was summoned to explain the inclusion of extraneous and indecorous details in the painting. The tone of the hearing itself was cautionary rather than punitive; Veronese explained that "we painters take the same liberties as poets and madmen", and rather than repaint the picture, he simply and pragmatically retitled it to the less sacramental version by which it is known today.

In addition to the ceiling creations and wall paintings, Veronese also produced altarpieces (The Consecration of Saint Nicholas, 1561-2, London's National Gallery ), paintings on mythological subjects (Venus and Mars, 1578, New York Metropolitan Museum of Art ), and portraits (Portrait of a Lady, 1555, Louvre). A significant number of compositional sketches in pen, ink and wash, figure studies in chalk, and chiaroscuro modelli and ricordi are in circulation. Veronese was one of the first painters whose drawings were sought by collectors during his lifetime.

He headed a family workshop, including his brother Benedetto, sons Carlo and Gabriele, that remained active after his death in Venice in 1588. Among his pupils were his contemporary Giovanni Battista Zelotti and later Giovanni Antonio Fasolo and Luigi Benfatto (also called dal Friso; 1559-1611) 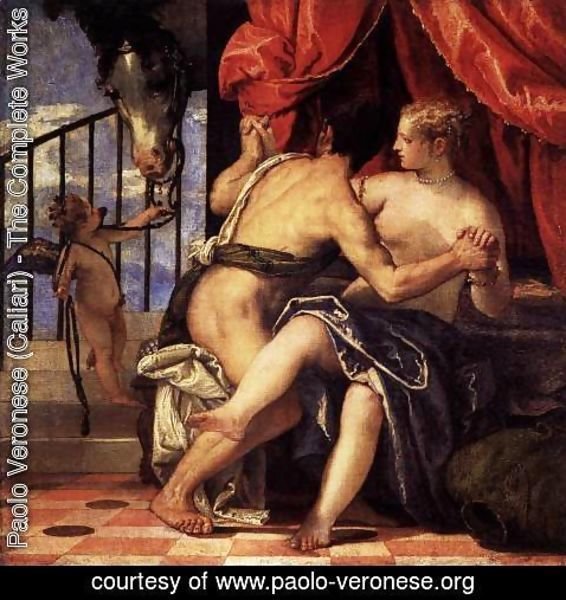 In 1648 Carlo Ridolfi wrote of the Feast in the House of Levi that it "gave rein to joy, made beauty majestic, made laughter itself more festive." A modern assessment of Veronese's achievement is worth quoting at length:

The French had no doubts, as the critic Theophile Gautier wrote in 1860, that Veronese was the greatest colorist who ever lived--greater than Titian, Rubens, or Rembrandt because he established the harmony of natural tones in place of the modeling in dark and light that remained the method of academic chiaroscuro. Delacroix wrote that Veronese made light without violent contrasts, "which we are always told is impossible, and maintained the strength of hue in shadow.

This innovation could not be better described. Veronese's bright outdoor harmonies enlightened and inspired the whole nineteenth century. He was the foundation of modern painting. But whether his style is in fact naturalistic, as the Impressionists thought, or a more subtle and beautiful imaginative invention must remain a question for each age to answer for itself. (From Wikipedia)

Report an error on this page